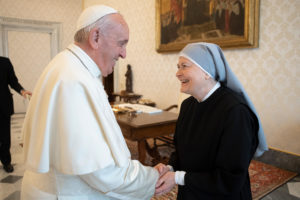 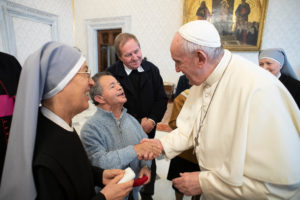 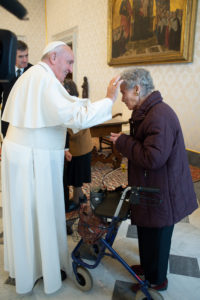 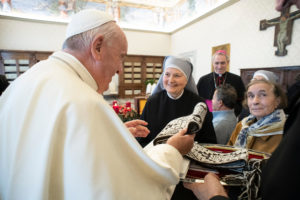 The audience had been requested several months in advance so that Mother General could present the Pope with the gifts that the Congregation had prepared for him for his golden jubilee of priesthood. 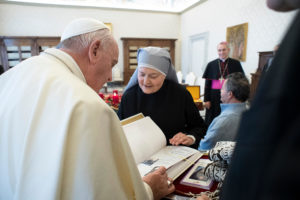 The delegation of Little Sisters included a 99 year old Sister who had served for many years as provincial superior of our Italian province. Among the Residents were two Italians, a Romanian and women from Greece and Libya. The Residents felt privileged to represent all the elderly of our homes around the world.

As they were escorted across the Vatican grounds, with one person in a wheelchair and one using a walker, our little delegation was aware that they were attracting attention, as well as gestures of kindness.

When their turn came to see the Holy Father our group found him standing waiting for them in front of the chalices, which were displayed on a table with an Advent wreath next to them. Each one greeted the Pope, shook his hand and said a few very emotional, heartfelt words. 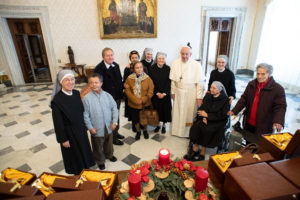 Mother General recounted, “We could sense that the Holy Father was moved to see these elderly people with bright eyes like children, assuring him of their prayers. Mrs. Concetta introduced herself by saying that she came from Sicily, and the Holy Father added: ‘But not from the mafia!’ Mrs. Elena wept with emotion as she told him: ‘We are praying very much for you and your mission, and we’ll continue to do so!’”

On learning that Sr. Thérèse Nazarena was 99 years old, he said: “Here’s a postulant!” and she grasped his hand on her chest, kissing it and assuring him of her prayers.

Mother María concluded, “I cannot find words to express how charming the Residents were; they were so simple, saying just the right thing, with words straight from the heart. As we were getting ready for the photo, the Holy Father said at one point, ‘There you are; that is everyday holiness.’ … Having shared such a tremendous joy with our Residents, I am reminded of the Gospel words which open the prologue of our Constitutions: ‘I praise you, Father, Lord of heaven and earth, that you have hidden these things from the learned and the clever, and have revealed them to little ones. Yes, Father, for such was your good pleasure.’”