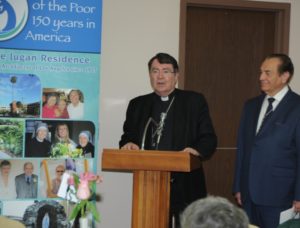 The Little Sisters of the Poor are esteemed by Archbishop Christophe Pierre, who hails from the same village as the order’s foundress.
Robert Brennan

SAN PEDRO, Calif. — Many Americans are only aware of the Little Sisters of the Poor because of the religious order’s fight against government-mandated contraception. But this August they will celebrate their 150th anniversary of the community’s arrival in the United States.

The congregation was founded in France in 1839 by a humble religious sister named Jeanne Jugan, who opened her own home to a blind elderly woman who had nowhere else to go. From this simple act of charity grew a movement — and then a full-throttle religious order dedicated to taking care of the needs of the elderly poor, doing so with a complete and absolute faith that God will provide all the resources necessary to carry out that mission.

In 1868, the Little Sisters of the Poor landed in Brooklyn. There are no planned giving departments, no Little Sisters of the Poor annuities to be purchased for a donation, just the sustaining providence of God and the generosity of friends and strangers. For 150 years, since first stepping foot in New York, the sisters have experienced firsthand how God and all those friends and strangers have graced them as they now span 26 dioceses across the United States. CONTINUE READING.