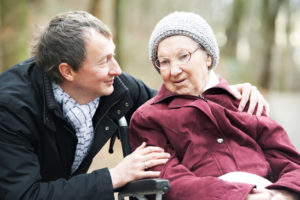 Suffering should draw us together.

Today I will reflect on what Saint John Paul II referred to as suffering’s challenge to communion and solidarity. This theme has great relevance to end of life care, and to current debate over assisted suicide and euthanasia.

Let me begin with a story. Nearly 20 years ago, a Little Sister and I had the privilege of interviewing Helen Alvaré, a true giant in Catholic intellectual and prolife circles. We asked her what she considered the most compelling argument against euthanasia.

Her answer really surprised me. 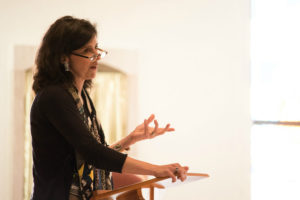 “It’s more about us than it is about them,” she replied. Helen was convinced that the solution to assisted suicide and euthanasia is for those who are able-bodied to develop daily habits of empathy and loving service so that they will be up to the challenge of surrounding the ill and the disabled with loving support.

If the ill were accompanied with compassion in their suffering, she said, they would be much less tempted to want to end their own lives.

Today, surveys reveal that the most commonly cited reasons for requesting assisted suicide are not related to physical pain or discomfort.

Existential suffering is at the heart of the assisted suicide movement. People choose death because they are afraid of losing their personal dignity and autonomy, of becoming a burden to others or being abandoned. This is tragic.

Referring to the parable of the Good Samaritan, Pope John Paul II wrote that we must never pass by on the other side of the road when we encounter a suffering brother or sister.

We must stop, allow ourselves to be moved by the misfortune of the other person, and offer concrete and effective help. This is compassion: it is to cultivate an interior sensitivity of the heart that leads us to do whatever we can to relieve the suffering of another.

John Paul wrote that the Good Samaritan “puts his whole heart into” assisting the other.

“He gives himself, his very ‘I’, opening this ‘I’ to the other person.” The Good Samaritan offers the sincere gift of himself.

He continued, “We could say that suffering … is also present in the world in order to unleash love in the human person, that unselfish gift of one’s ‘I’ on behalf of other people, especially those who suffer.

Compassion means to share in the suffering of another in such a way that it also becomes mine. 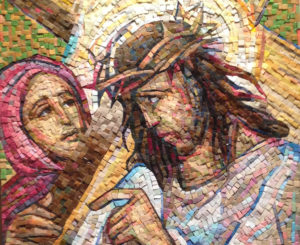 There is no greater model of compassion than Our Lady. As she stood at the foot of the Cross, Mary was united so completely to her Son that she shared in his redeeming death; some call her co-redemptrix. Mary was the first person to be able to say, “I complete in my flesh what is lacking in Christ’s afflictions.”

We might call Mary a super-sharer in the sufferings of her Son, but she was not the only one to show him compassion.

This week try to take time to make the Stations of the Cross. You will see that along with his Mother, Christ encounters others who share in his suffering: Veronica, Simon of Cyrene, the good thief, John the beloved disciple.

As you make the Way of the Cross, place yourself alongside these figures. There are people in your life who are waiting for you to be Veronica, Simon of Cyrene or Mary of the Cross for them. Ask Our Lord to help you to reach out to them with compassion.