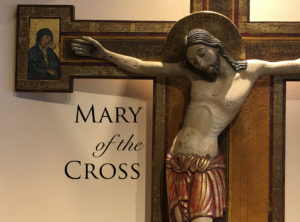 Mary of the Cross

Human suffering is one of life’s great questions, and it’s been on my mind a lot in the past few years as I’ve followed the debate over assisted suicide. The story of a terminally ill young woman who chose to take her life particularly caught my attention.

Her name was Brittany Maynard, she was dying of a brain tumor and she was the poster child of those trying to legalize and morally normalize assisted suicide and euthanasia. Brittany spoke extensively in the media of her intention to end her life because she wanted to avoid what she called purposeless suffering and the shame associated with terminal illness.

I have been around the elderly and dying since I was 15 years old, and I had never heard anyone refer to illness as shameful. It was so sad to hear this beautiful young woman describe her suffering that way. I don’t know if Brittany Maynard was a person of faith — I suspect she wasn’t because she never mentioned God — but for us who are, suffering never has to be without meaning or purpose.

In this Lenten video series, I will reflect with you on the question of suffering and our response to it as the followers of Jesus Christ. The following words of Pope Benedict XVI touched me very deeply and I think they’re a good starting point: 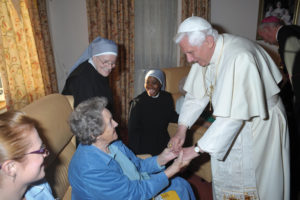 “A society unable to accept its suffering members and incapable of helping to share their suffering and to bear it inwardly through ‘com-passion’ is a cruel and inhuman society….”

“To accept the ‘other’ who suffers, means that I take up his suffering in such a way that it becomes mine also. Because it has now become a shared suffering, … this suffering is penetrated by the light of love.”

As we consider the Christian meaning of human suffering in these videos, I suggest that we try to enter into it, to bear it inwardly as Pope Benedict said, in ourselves and the lives of those we love.

As we make this Lenten journey, let’s place ourselves under Mary’s protective mantle. She stood beneath the cross with true compassion and she can teach us to do the same. That is why I chose “Mary of the Cross” as the title of this series. 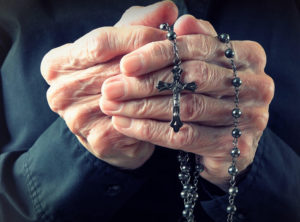 “Mary of the Cross” is also the religious name of our foundress, Saint Jeanne Jugan. She chose this name herself and she lived it out throughout her long life. She remained strong at the foot of the cross — out of love for Our Lord and in solidarity with the suffering members of Jesus Christ, as she referred to the elderly.

Before Jeanne Jugan founded our congregation, she was a member of a third order founded by St. John Eudes. This lay movement encouraged its members to unite their hearts to the heart of Jesus. It instructed them to keep a small crucifix with them, “to take it in their hands, kiss it and meditate on it, so that Jesus would speak to their hearts.” I can think of no better way to begin this series than to do the same.