Each October we observe Respect Life Month in dioceses around the United States. This year’s theme is “Be Not Afraid,” but of what, or whom, are we supposed to not be afraid?

Pondering this question, I recalled an experience I had while attending the Convocation of Catholic Leaders in Orlando last summer. I met a young woman and her mother from my diocese. The daughter, who had an obvious disability and was using a power wheelchair, had been chosen as a delegate to the Convocation; her mother, a college professor, was there as her assistant. 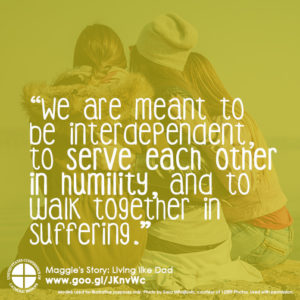 As we got acquainted, we chatted about accessibility issues in the church. The young woman told me that while most parishes have remedied architectural barriers such as curbs and restrooms, the seating area designated for wheelchairs is often still found way off to the side or at the very back of the sanctuary – evidence, she believes, that handicapped individuals are still not fully embraced as an integral part of parish life.

What she said next cut right to the heart: “It’s fine to be able to get in and out of church, but it would be nice if someone smiled at me once in a while, or spoke to me as if I actually knew what was going on.” I was stunned. All too quickly we wrapped up our conversation, traded business cards – yes, my new friend has a college education and a meaningful job – and went our separate ways. But I haven’t been able to get this conversation off my mind.

When I got home I did a bit of research on attitudes toward the disabled and was shocked by a recent study in the U.K. that found that two thirds of adults are afraid of people with disabilities and feel so awkward around them that they go out of their way to avoid them. Another study indicated that 1.4 million senior citizens in the U.K. feel lonely and cut off from society, many going for over a month at a time without talking to another human being. Since these were not American studies, it would be easy to dismiss this data, but I suspect that we have a lot in common with our British brothers and sisters. 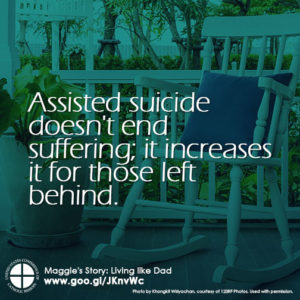 Scholars in the field of disability studies suggest that disabled people mirror a certain kind of personal loss or death. They remind us of our own limitations and mortality – and that is what frightens us. As long as we can avoid those who are handicapped or elderly, we can keep our fears about our own fragility and eventual death at bay. But we are all broken in some way – if we were honest, we would admit that we each experience areas of weakness or disability every day, and none of us is really more than one accident or illness away from losing our cherished independence.

The church proposes a different approach. In the face of suffering and death she tells us, “Be not afraid.” With words that echo through salvation history into the depths of our hearts, the Lord says to us, “Do not fear: I am with you” (Isaiah 41:10). He speaks these words not as One who merely observes our pain, but as One who experienced intense suffering and death in his own flesh before triumphing over death itself.

Reflecting on the wounds of the Risen Christ, we see that even our most difficult trials can be the place where God manifests his victory. He is always with us. Jesus promised this when he gave the disciples the same mission he gives to each of us: Go out to all the world!

So if we run toward our most vulnerable brothers and sisters rather than running away from them, marginalizing them or excluding them from our lives, we will experience the love of God in a powerful new way as we contribute to the building up of a society that witnesses to the beautiful, profound reality that God has created each of us in his own image and likeness, that he loves us infinitely, and that he has confided each person to the love of all.

This commentary was written for Respect Life Month. Sister Constance Veit is director of communications for the Little Sisters of the Poor.