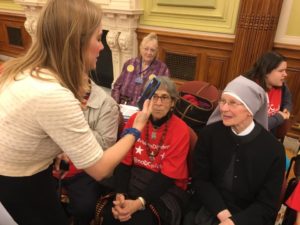 I witnessed firsthand a tragically historic day in our Nation’s Capital. By a lopsided vote of 11-2 the D.C. Council voted to legalize assisted suicide. Because of Washington’s unique status as a Federal City, it appears that no public vote will be required to ratify this frightening legislation. This action will likely give impetus to the assisted suicide/euthanasia movement in various states.

As a Little Sister of the Poor at the service of the needy elderly, and a daughter whose mother is critically ill, I found yesterday’s events profoundly sad and troubling. To begin with, the only Council member who spoke up against the bill began by stipulating that in arriving at her position she had eliminated moral and religious principles from her reasoning. Why did she feel the need to qualify her position in this way, with a good number of clergymen, religious sisters and African American senior citizens sitting just a few feet in front of her? Was this the necessary bow to political correctness that will allow her to maintain respectability among her colleagues?

The other Councilwoman who voted against the bill never uttered a single word. Aside from this, the two things that most struck me during the Council’s one-dimensional discussion were their constant invocation of the concept of absolute personal autonomy and choice, and the manipulative use of emotions to justify “medical aid in dying,” as this practice is euphemistically called.

Referring to the first point, I could not help but think of Pope Saint John Paul II’s observation in Evangelium Vitae that when the sense of God is eclipsed, so is the proper sense of man as a creature made and sustained by God. Quoting Gaudium et Spes from the Second Vatican Council he wrote, “Without the Creator the creature would disappear…. But when God is forgotten the creature itself grows unintelligible.”

John Paul II continued, “Man is no longer able to see himself as ‘mysteriously different’ from other earthly creatures; he regards himself merely as one more living being, as an organism which, at most, has reached a very high stage of perfection.” This passage came to mind as Mary Cheh, the bill’s sponsor, spoke of assisted suicide as just “one more choice among many,” such as refusing treatment or choosing to starve oneself. As if suicide through self-starvation is acceptable!

Cheh referred to assisted suicide as the “final claim of agency over one’s existence.” Other Council members invoked the right over one’s body, the right to personal choices and the individual’s right to privacy versus the state’s right to ensure the safety of D.C. residents. One member went so far as to claim that respecting another’s wish to control his or her life and death through assisted suicide is an extension of the Hippocratic oath’s injunction to “do no harm.”

No one on the Council acknowledged the reality that none of us is ever truly independent throughout life. Each of us belongs to a family and/or community. Our personal decisions are never really ours alone; they always have an impact on others, especially those closest to us. Saint John Paul II spoke of a distorted notion of freedom “which exalts the isolated individual in an absolute way, and gives no place to solidarity, to openness to others and service of them.” He also wrote that suffering exists in the world in order to unleash love. This love is expressed through the sincere gift of self to those who suffer, creating a cycle of compassion and solidarity.

It is this shared dimension of suffering, expressed through compassion, which gives it meaning. As each of the Council members claimed that constituent stories or their own painful personal experiences had shaped their decision to vote in favor of assisted suicide, I wanted to ask them, “But what did you do to relieve your loved one’s terrible suffering? How did this experience make you a better person? What did you receive from your loved one in their final days that you would not have received if they had checked out early?” An outlook shaped by these questions could make all the difference because it would guide our hearts toward effective, loving responses to the terminally ill, rather than pity, condescension or apathy.

As we continue to try to influence public dialogue on this issue, even if assisted suicide is ultimately legalized in D.C. and elsewhere, let’s keep in mind these words from the U.S. Bishops’ pastoral letter on assisted suicide, entitled To Live Each Day with Dignity, “When we grow old or sick and we are tempted to lose heart, we should be surrounded by people who ask ‘How can we help?’ We deserve to grow old in a society that views our cares and needs with a compassion grounded in respect, offering genuine support in our final days. The choices we make together now will decide whether this is the kind of caring society we will leave to future generations. We can help build a world in which love is stronger than death.”