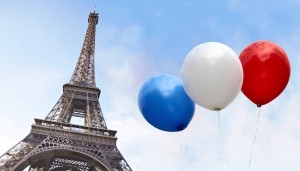 As members of a congregation founded in France, we Little Sisters feel a certain closeness to the French people and culture. Last Thursday we had a little party with the Residents to celebrate bastille Day, France’s equivalent to July 4. I explained to them the significance of this holiday as a commemoration of the beginning of the French Revolution, and the implications of the Revolution for the Church in France. We made this silly model of the Eiffel Tour out of sugar wafers, ate crepes and had a trivia quiz based on facts of French history. Just a little bit of fun on a hot summer day.

As the party ended I asked the residents to pray for France, the Church’s “eldest daughter.” Little did we know at the moment that a terrorist attack was being carried out in Nice, where we have a home for the elderly. Hopefully our innocent prayers have consoled and supported the victims of this tragedy in some way. 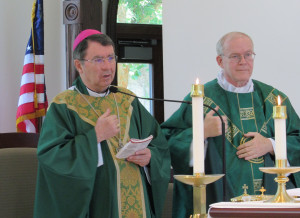 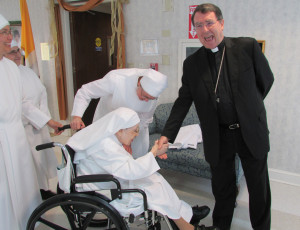 Today we enjoyed another sign of our close ties with France, as we received a visit from the new apostolic nuncio, Archbishop Christophe Pierre. Archbishop Pierre is a native of St. Servan, the Breton town where Saint Jeanne Jugan founded our congregation in 1839. Knowing how happy our Sisters at the motherhouse in Brittany would be to know of our visitor, we emailed them a photo after Mass, and received a very quick response from them. 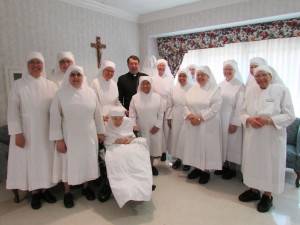 We hope that Archbishop Pierre will always consider Jeanne Jugan Residence his home away form home in Washington!