I pray that you are experiencing the joy and hope of Easter! 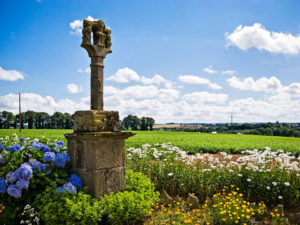 For Saint Jeanne Jugan the Cross was part of daily life. The Breton countryside was dotted with roadside Calvaries, and she often stopped to pray at these simple shrines during her begging rounds.

I’ve shared how she made the Stations of the Cross every day, telling the novices who accompanied her that “We are grafted into the Cross and we must carry it joyfully unto death.”

But Jeanne Jugan wasn’t morbid. In her last years she was described as serene, high-spirited and joyful; she loved to sing and laugh, and to get others to do so. One Easter she said to the novices, “Come on little ones, let’s sing the glories of our risen Jesus!”

In 1857 five novices at the motherhouse died of typhoid fever. This loss of young lives was a trial for everyone, including Jeanne Jugan. But she encouraged the novices to trust in God, saying, “Don’t cry; another one of our own has left for Paradise! That will be our reward one day too.”

Jeanne Jugan’s absolute trust in God and the hope of heaven sustained her long into old age. The following message of Saint John Paul II to the sick would have resonated with her:

“Dear sick brother or sister! If someone or something makes you think that you have reached the end of the line, do not believe it! If you know the eternal Love who created you, you also know that there is an immortal soul within you.

There are various seasons in life; if by chance you feel winter approaching, I want you to know that it is not the last season, because the last one will be spring: the springtime of the Resurrection. Your whole life extends infinitely beyond its earthly limits: heaven awaits you.”

I hope you find these words as encouraging as I do!

I’d like to share with you another source of hope I’ve discovered. Our house in Washington is located next door to the National Shrine of Saint John Paul II. I often go to pray in this church, where the dominant image is not a crucifix, but the Risen Christ clad in priestly robes, bearing his glorified wounds.

One day I was praying there and found myself wondering why the risen Christ still bears the wounds of his crucifixion. I did some reading and came to understand that there are several reasons for this.

The two I’d like to focus on are that Christ kept his wounds in order to confirm the faith of his disciples in the resurrection, and that he wants them to serve as a reminder of how mercifully he has helped us.

St. Thomas Aquinas suggested that there is “perfect beauty” in the fact that Christ was raised with glorious wounds.

A contemporary Dominican commenting about Aquinas’ writings suggested, “What if all the saints in heaven were to show forth in bodily form their personal configurations to Christ’s cross?”

Since there is no resurrection without the cross, he wrote, it seems fitting that all of us will somehow, someday display our unique cross in experiencing the fullness of Christ’s paschal mystery in the glory of heaven.

“I know that the saints in heaven have no shame,” he continued.

“The sufferings that they underwent on earth were precisely the way that they were conformed, buy God’s grace, to Christ’s paschal mystery … They are participations in Christ’s own cross.”

So you see, our illnesses and weaknesses are not shameful and our suffering is never purposeless! 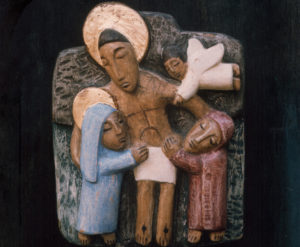 “Our conformity to Christ’s Cross now will allow us to share the victory of the risen Lord, marked forever by the scars of the redemption he won for us.”

I hope these words are encouraging for you in your trials of disability or ill health, whatever they may be — the suffering of being unable to fulfill your desired life roles or to pursue your dreams, the suffering of fatigue, pain and loneliness, of feeling yourself a burden to others or actually being abandoned by them.

I pray that whatever your sufferings are, you can identify with Christ’s cross and his resurrection, singing with Saint Jeanne Jugan, “the glories of the risen Jesus.”

May the celebration of Divine Mercy this Sunday bring you to a new awareness of God’s merciful love in allowing you to share in the Passion of Christ, that you may know the power of his resurrection!