“Be Not Afraid” was the rallying cry at the August 11th “More Than You Realize” conference  echoing the very same call St. John Paul II gave exactly 25 years ago when he visited Denver for World Youth Day in 1993. 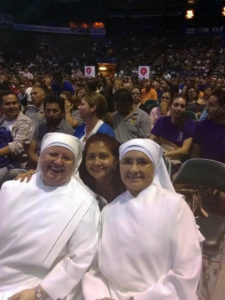 Two of our Little Sisters attended the event at the Budweiser Event Center in Loveland, which, with 5,500 faithful from across the archdiocese, happened to be the largest Catholic gathering in Colorado since WYD ‘93. The all-day conference was presented in both English and Spanish tracks, featuring a dynamic line-up of  renowned Catholic speakers and culminating in a  powerful commissioning Mass. The conferences revolved around the idea of discipleship. Through engaging talks and videos, the attendees were invited to join a new movement of discipleship within the archdiocese echoing the one sparked 25 years ago at World Youth Day.

The name More Than You Realize and the logo resembling an eyechart, stem from the idea that almost everything may appear a certain way at surface level, but upon closer inspection, it can be more than one realizes and seen in a different light. This is especially true when it comes to the Catholic Church. 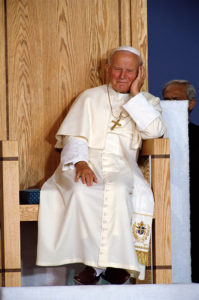 Speaking in both English and Spanish Archbishop Samuel J Aquila touched upon what World Youth Day ‘93 means for us today. He ended his homily by stating; “We have an opportunity to make a major impact for Jesus Christ, even as the surrounding culture is becoming less Christian. The Pope opened the doors for those who attended to become greater disciples of Christ not just directly after World Youth Day but forever. St. John Paul the II believed in retrospect that a revolution had taken place in Denver. We today are the inheritors of this spiritual revolution, and we must not be afraid to put out into the deep to let our nets down for a catch.”