We recently heard from Jane, founder of Vida, a British organization dedicated to reaching out to seniors. Maybe we could learn a few things from our british friends! …

Taking care of your elderly loved ones is easier said than done. While we agree that as children and grandchildren we can do more for the elderly, social care in the UK is ultimately a broken system and families do not get the support they require.

Billions of pounds have been invested in a broken care system that is failing to achieve the objective of enabling our elderly loved ones to live a fulfilling and independent life with dignity.

Working in the care industry, Vida’s team and carers regularly witness the detrimental effects of social isolation and loneliness on the elderly. It is a growing issue in the UK, with over 50%of those aged above 75 living alone. Isolation impacts a person’s mental and emotional health; it leads to depression, sleeplessness and the increased chance of developing dementia. It also impacts a person’s physical health by increasing the likelihood of mortality by 26% and is as harmful to a person as smoking 15 cigarettes a day.

In December we embarked on a research project to find out more about loneliness amongst the elderly in the UK. The results were shocking: 3 out of 5 people were not visiting their elderly relatives on Christmas day, and of the 1 in 3 people that visited elderly relatives who needed care, they only did so once a month or less. The reality of the situation was alarming and we knew we had to do something to raise awareness and encourage people to reach out to elderly loved ones who suffered from loneliness.

We got to work and our co-founder Devika Wood spoke about the issue on 20 national radio stations including the BBC, successfully reaching out to six million listeners. Additionally, we organised and volunteered at a number of programmes, such as Tea Dances and Art and Meditation sessions, for the elderly within London.

Today, we are proud to announce that we’re launching Vida’s Campaign Against Social Isolation with a video that highlights the key issues of this growing problem. 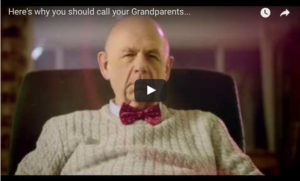