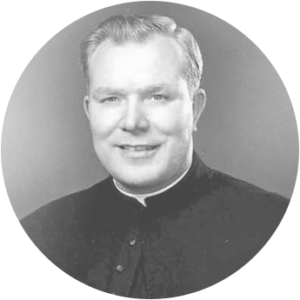 The following article is an excerpt from a longer article entitled Mary’s Man on a Mission, about Father Patrick Peyton, which appeared recently on the Angelus, news site of the archdiocese of Los Angeles. To read the complete article click here.

Whenever Father Peyton stayed in Los Angeles, whether for Family Theater or Family Rosary, his preferred accommodations were with the local community of the Little Sisters of the Poor, first at its home in Boyle Heights and then at its current home in San Pedro.

Throughout his many visits to the Little Sisters of the Poor, Father Peyton developed a special bond with the order, and was frequently invited to speak to women in formation at the Little Sisters’ novitiate in New York. The topic he was asked to speak on was his favorite — his mother Mary.

Though Father Peyton enjoyed his time with the Little Sisters, it was never a vacation. “He didn’t come out here for the sunshine,” said Wallace. “I’m not sure he ever took a day off.”

Sister Anthony, a Little Sister of the Poor, agreed with that sentiment: “He was very dedicated to spreading the rosary, totally focused. Every place he went, it was to spread the rosary. … If you happened to cross his path, you got a job.”

She recalled one example of Father Peyton’s passion for his mission to spread the rosary: “At the fall of the Iron Curtain, when the Russians had religious freedom, we found out about it in the evening. … I happened to be in the same room [Father Peyton] was in when he was making this phone call. He was telling whoever he was speaking to: ‘Now you can send those rosaries.’ ”

One of these residents is Lupe, who, when she was young, would go on walks with her uncle and Father Peyton. She remembered that, above all, he loved to hear stories about how her family was doing.

Father Peyton and his devotion to the rosary continue to inspire Lupe to this day: “Through his inspiration, I make rosaries. I make rosaries, and I give them out, so everybody could pray the rosary.”

It was in the presence of the Little Sisters that Father Peyton died on June 3, 1992. During his final night, the sisters took shifts watching over the priest, praying his beloved rosary over him when he was no longer able to.

As the night grew long, it appeared as though Father Peyton’s suffering was increasing, and his face looked stricken with pain. The sisters left the room and a priest entered to pray over Father Peyton and to offer last rites.

Mother Marguerite, then Sister Marguerite, remembered that, after this period of blessing, Father Peyton looked “calm and different, like he was OK, whatever blessing Father gave him.”

“It was the experience of a lifetime, to be with a saint as he was dying,” said Mother Marguerite. What struck her most was how Father Peyton was “just like anyone else in the last moments. Just like somebody that was unknown to anyone, except was totally known by God himself and was waiting for him.”

At the end of the sisters’ vigil, Father Peyton spoke his last works: “Mary, my Queen, my Mother.”