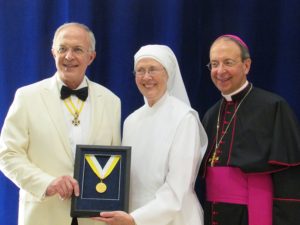 The selfless charity and intrepid spirit of a congregation of religious sisters were recognized at the States Dinner as the Knights of Columbus bestowed its highest honor, the Gaudium et Spes Award, on the Little Sisters of the Poor.

The keynote address at the dinner was delivered by Cardinal Marc Ouellet, prefect of the Congregation for Bishops at the Vatican, who is archbishop emeritus of Quebec. The cardinal praised the Knights of Columbus for its practical works of charity performed not just “for the poor, but with the poor.” He said that Knights throughout the Order are fulfilling the vision of Pope Francis by going to the peripheries to aid those most in need.