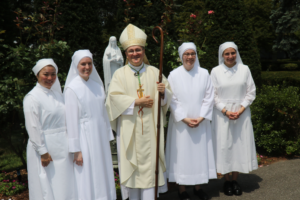 On Saturday, July 22, two novices made their profession as Little Sisters of the Poor at our novitiate in Queens Village, NY. Sr Mary Gerard (pictured on the bishop’s right), originally from upstste New York, received her first assignment for our home in Palatine, Illinois. Sr Faustina Clare (pictured on the bishop’s left), from southern Maryland, has been assigned to our home in Philadelphia. Two new novices were received into the Congregation the previous day.

Most Rev. James Massa, auxiliary bishop of Brooklyn-Queens, NY was the main celebrant and homilist for the Mass.