To see floods of young people, and not be at a rock concert, yet converging in one arena for the King of Kin 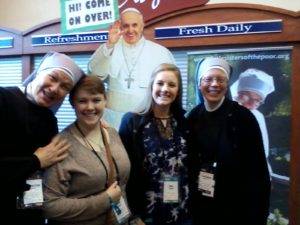 gs! An organization that started as a small seed in the backwoods of Kansas… now on 125 campuses and 500+ missionaries strong! FOCUS…the Fellowship of Catholic University Students. Yes, the Lord is doing amazing things among the young American Catholics of today, an antidote to the many fallen-away Catholics and empty pews.

One thing that impressed us greatly was the spiritual maturity and depth of these young people. Attending an “average” Catholic youth conference, we as Little Sisters are used to the small clusters of girls who sheepishly whiz by our booths, trying not to make eye contact. In San Antonio, we didn’t even have to put ourselves “out there.” All it took was a smile, sometimes initiated by the young adult, and during peak times such as during the lunch break, we hardly had time to eat because the flow of people was constant, and there always seemed to be someone new coming up to peruse our materials and ask questions. 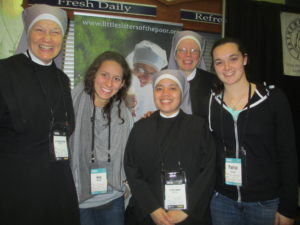 It was very clear to us that previous contacts of many of these young women with our various homes for retreats, overnight hospitality, or service experiences had left an impression on their hearts far beyond what our Little Sisters in the Homes probably ever realized when they hosted them. These women were so excited to see the Little Sisters again, and there was definitely a bond because of the warm welcome they had received from our Little Sisters in different homes around the country. This being one Little Sister’s fifth FOCUS conference, it was the first time where she saw so many “repeat visitors,” young women coming back with a group of friends. One reason for this was our biggest hit — the “Words of Wisdom”: postcards and notes sent from our Residents around the U.S. These messages of encouragement and sharing of life experience moved the FOCUS attendees … even to tears! Some took handfuls back to their school group. 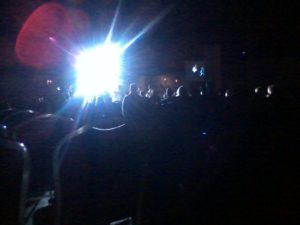 Thursday night, mid-point through SEEK, was Eucharistic Adoration and Confession night. The priests who would serve as the confessors had supper together beforehand, and then offered intercessory prayers among themselves for all those who would approach the sacrament. Adoration of the Blessed Sacrament lasted from 8:30 until 10:30 pm. It was followed live, as it unfolded, by 1.5 million people — livestreamed on Facebook. Tears flowed freely during this time, and one could even hear young men crying out loud. Hardly one minute had passed after the beginning of Exposition, when the youth had started heading out of the room in great numbers … to go to confession next door! Such a labyrinthine line started to form that the worship song leaders had to make an announcement on behalf of the fire marshal that we were creating a dangerous fire hazard and no one else should line up at that time. A message was seen on Twitter that read something like: “Where else can you find so many people going to Confession that it’s creating a fire hazard?”

Finally around 9:00 pm they made an announcement that those waiting in prayer could now join the Confession line … and another throng arose! Over 4,000 Confessions were heard that night — and, we are told, amazing conversions took place. Already before that and in the two days following, it was not uncommon to see priests sitting or standing in random spots around the convention center wearing a purple stole and hearing someone’s Confession. One Little Sister even passed this Sacrament taking place in the middle of a flight of stairs! 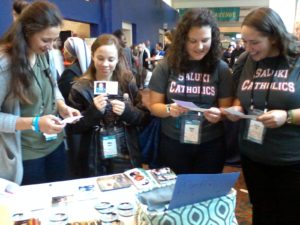 The keynote speakers were amazing: Fr. Mike Schmitz, Sr. Bethany Madonna, SV, Dr. Edward Sri and a slew of others on fire with the Holy Spirit and speaking truth to so many hearts! In the mornings they would have separate keynotes for the men and the women. The women’s sessions attended by one of our Little Sisters were filled with the beauty of our feminine genius and dispelled the myths and false ideologies of our vocation as women that both the present culture and recent decades have presented. Each afternoon there were about nine break-out sessions at 2:30 pm and the same number at 4:00 pm. They filled up quickly, and the young adults soon learned this was not the place to arrive at the last minute. Many sessions filled to standing room only and had to turn away hopeful listeners.

Personally, one Little Sister was touched by a young woman named Niki who stopped at our table with several other girls. We were trying to figure out where to go for the various talks we were interested in going to. It turns out Niki and our Little Sister had the same conference in mind — Scott Hahn was speaking on the Mass in the Book of Revelations, based on his book The Lamb’s Supper. So they went together and found themselves in a room packed with people. They got in by the back door and were just by the podium; all seats were taken, so they sat on the floor with many others. Niki confided that she had a problem attending Mass. At the beautiful and well-thought out liturgy at SEEK, she found herself “bored” and considered it “too long.” She wanted to have a better appreciation for the Mass. After the talk, she was glowing. Our Little Sister asked her what she thought about the conference. She confided that she was going to start reading the Bible and becoming more familiar with Scripture to fully participate in the Mass. This turnaround was such a sight to behold!

Lourdes’ story was also touching. She felt called to the religious life and confided to her parents last year. Her mother advised her to at least try dating before she decides on anything definite. One day she announced to her parents that she had met Rick and was dating him. Rick had not been practicing his faith, but because of her, he started coming to Mass. Then they came to SEEK. Lourdes heard the call very strongly during prayer to offer her life to God as a religious and later, Rick confided to her that during adoration, he had a vision of her wearing a religious habit. This led her to come to our table. Lourdes’ expression was somber when she told one of our Little Sisters all this, and there were tears in her eyes. Rick had come to the table with their two other friends but Lourdes sent them all away so she could talk freely. It was very striking to see in her eyes the realization of the sacrifice that God was asking of her — the sacrifice God was asking of both of them, because now that she is looking to be a religious, Rick is thinking that maybe he is called to the priesthood. The gift of chastity, of celibacy, is no small matter; it is very beautiful, it is very costly, and it gives life to the world. How could our Little Sister convey that to Lourdes? The next day our Little Sister saw them walking hand in hand with faces slightly forlorn. May they find the courage and strength to carry out God’s will! Lourdes did express the desire to visit one of our homes. 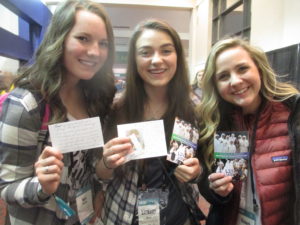 Our experience would not have been possible without the warm and generous Knights of Columbus of San Antonio, whom we had asked to provide our transportation to and from the airport in this very large city where we did not know anyone. They could not have been kinder and more accommodating to these four “strangers in their midst”— and we sensed that the Little Sisters of the Poor could never be considered “strangers” by these dear friends of Christ and of his Church.

We will conclude with the personal spiritual reflection of one of our Little Sisters:

“My experience at the recent SEEK Conference in San Antonio, Texas was exhilarating fraternally, with a deep and spiritual impact upon my soul. As a religious Sister, I can grow closer to my Spouse, Jesus Christ, and this encounter shared with my Sisters fraternally, as well as in faith, has guided me to delve deeper in my commitment, fidelity to my vows, and my faith. 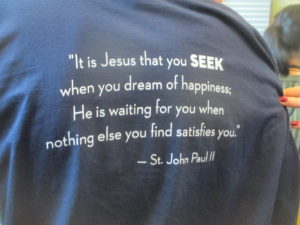 “As well, the young people (12,000+ strong) drew me out to express sincerely my faith and my love of my vocation and most importantly, my love of Christ and the gift of serving the elderly. The young are vibrant and alive with a desire to seek and find Jesus in their everyday life and to know His desire for them in life.

“Through this encounter we are enlightened together – the youth with the adults from as many as 125+ sponsor booths (religious men and women along with diocesan priests), with multiple representatives at each booth, to an awareness of the ‘Larger Church’. We all could clearly sense God’s Presence through the different bishops, archbishops presiding, and priests concelebrating at the Masses, along with the speaker presenters who so clearly led us to understand the call to ‘Discipleship’. We are called to ‘serve’ – every one of us!

“One comes away knowing, ‘We are not alone’!”

We are so grateful for the prayerful support given by all of our Little Sisters and Residents across the country! And we are filled with great hope that God will answer these prayers and bless these efforts with new Little Sister vocations to follow in the footsteps of our Mother, St. Jeanne Jugan!