I recently participated in the Convocation of Catholic Leaders in Orlando, Florida. The purpose of this large, unprecedented encounter between U.S. Bishops and laity representing a wide variety of Catholic ministries was to study what Pope Francis has termed the “new peripheries,” and to form missionary disciples in the spirit of his first programmatic document, Evangelii Gaudium.

Invited to the Convocation to speak on a panel about the elderly, I felt a burden of responsibility as I prepared for the event because I knew that our 90-minute session would be the only moment during the Convocation when the unique needs and aspirations of seniors would be discussed.

We were scheduled to speak on the Convocation’s third day, so as I sat through the first two days’ plenary and breakout sessions, I was preoccupied about our own panel. I prayed that we would be able to effectively represent the elderly as both agents and recipients of the Church’s charitable and evangelizing mission, but as I heard more and more discussion about the “peripheries” – Pope Francis’ term for those on the margins of society – the Holy Spirit began to inspire me with a new and unexpected conviction.

As numerous speakers referred to immigrants and young adults as the future of the Church in the United States – and I reviewed the statistics I planned to present on the exponential aging of western societies – I had a sudden realization. The most significant and rapidly growing demographic in the Church is not Hispanics, Asians, or young adults, I thought, but older persons! Already senior citizens disproportionately fill the pews of our Catholic churches and serve in large numbers in every imaginable ministry. According to well-known Catholic journalist John L. Allen, Jr., by 2030 6.8 million additional U.S. Catholics will enter their retirement years, the stage of life when people are most likely to pray and go to church, and by 2050 elderly Americans will outnumber youth by over 16 million. Older people are not a periphery, I wanted to proclaim, but the mainstay, the bulwark, of the Church! 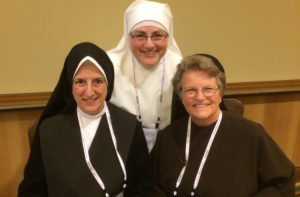 Nervousness about our panel turned into joyful enthusiasm as my co-presenters and I shared our practical expertise and our convictions about the dignity of every human life and the irreplaceable role of elders as wisdom figures with many gifts to offer. I was inspired by the commitment and compassion of those who participated in our session, but what really amazed me was how God led me to numerous encounters with inspiring older people during the rest of the Convocation.

I met a retired college professor who was quick to let me know that she was not actually a delegate to the Convocation, but was there to assist her daughter, a vibrant young disabled woman who had been selected to attend. A group of widows from Florida invited me to dine with them and enthusiastically shared how their lives had been transformed through the Cursillo movement. One older couple described their experiences training generations of altar servers in their parish, and another detailed their ministry preparing engaged couple for the sacrament of Marriage.

The most endearing seniors I met were several women from the Long-Island based group Catholics for Freedom of Religion (CFFOR), an initiative launched in 2012 in response to the HHS Contraceptive Mandate. The purpose of CFFOR is “preserving America’s First Amendment Freedom of Religion for our times and for ages and millions yet unborn.” The non-partisan group strives to establish parish groups to educate and advocate for religious liberty according to the original intentions of the U.S. Constitution. CFFOR sponsors diocesan events during the annual Fortnight for Freedom, gives presentations in parishes and schools and develops and distributes educational resources on religious freedom for school children. With the full support of their local bishop CFFOR has already spread to five states!

As I engaged with the women of CFFOR I recalled a homily of Pope Francis from the beginning of his pontificate, when he compared the elderly to “fine vintage wine and good bread” – an analogy with which these ladies would surely be pleased – and of a very recent homily in which our he told cardinals residing in Rome that they are not “tired old fools” or the “gerontocracy” of the Church, but rather “grandfathers” called to share their wisdom and experience and to pass on their dreams to today’s youth.

With such great numbers and so much to share, the elderly can hardly be considered a periphery in the Church. They will only become a periphery if younger generations push them aside and refuse to accept the gifts they have to offer. So let us welcome the new embrace between young and old that Pope Francis so ardently desires!